Thursday is normally the day I go climbing, but my ankle had been pretty painful that day so I decided to give it a miss. I had written a list of all the jobs I wanted to get done that night to make to most of having a free evening. As I sat down to my computer I saw a bit of a glow on my wall, having been cloudy for most of the day I was a bit reluctant to look outside as I thought it was just a reflection of some kind. The glow got brighter so I took a look outside and to my surprise, the clouds had started to clear and the sun was poking through.

Initially I had two locations in mind, Chrome or The Roaches. I decided to head to The Roaches, Staffordshire as a few weeks prior I had spotted a composition I liked but didn’t have the weather at the time. I quickly grabbed my gear and jumped in my car ready to set off. Now those of you who know me, know I suffer from Hayfever quite badly at this time of year, so running up The Roaches to try and chase the sun (as the clouds looked they they were completely disappearing) wasn’t my best idea! However, knowing I had time now on my side, I headed to the spot where I had previously seen the composition I wanted. Unfortunately the sun was in the wrong place and didn’t catch the grit rocks I had initially set out to shoot. I had a quick wander around trying to find a unique composition and came across a really nice ledge along the edge that I hadn’t seen anyone else shoot before. By this time the light had started to turn golden/orange so I set my tripod up and waited for the light to turn.

The Roaches are known for having beautiful red light cast upon the grit edges and I was really hoping that it was the case for this night too. I wasn’t disappointed, the light really set the grit edge on fire and I was blessed with some wonderful cloud too. The sky also lit up a beautiful fiery red after sunset too and I knew I had made the right decision to head out to The Roaches that night! 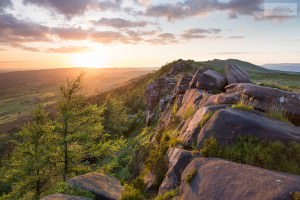 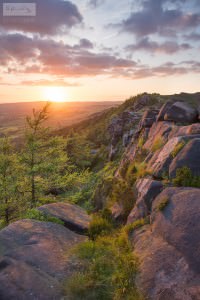 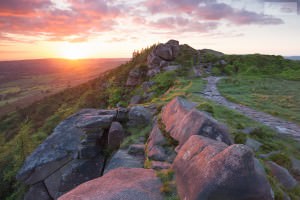 To purchase a print of The Roaches please visit my Peak District Photography gallery here or to keep up to date with all of my work, please head over and like my Facebook Page.