One of the places I wanted to visit was The Matterhorn in Switzerland. I had been to Switzerland twice before to ski, but I hadn’t seen the iconic Matterhorn or The Eiger, nevermind to do Switzerland landscape photography. In March 2014 I was lucky enough to be able to accomplish this wish. On the 15th March, my boyfriend and I set off on what we soon realised to be a 22 hour road trip to Randa, Switzerland. The journey was long and very tiring after very little sleep the night before. After mastering driving on the ‘wrong’ side of the road and putting up with the miserable clouds and rain for most of the journey, we finally arrived in the early hours of the morning. Even in the dark, the shadows of the mountains around were pretty impressive. Little did we know at this point the adventures we were about to experience in the following week!

The following day the weather was much better, by that I mean clear blue skies and sunshine! We couldn’t wait to get a first glimpse of  The Matterhorn so we went to Täsch and jumped on the first train to Zermatt (a car free town). We both sat on the train eagerly waiting for our first sighting of  The Matterhorn and upon our first peek, we were both very excited! You can easily see why this mountain is so iconic, it dominated the skyline with it’s very unique but recognisable shape. We spent the rest of the day exploring Zermatt, looking at the various trails and trains available for us to take. It very quickly became apparent that Switzerland don’t go lightly when it comes to pricing things! As sunset approached I decided to kick start my Switzerland landscape photography with a shot of the Täschhorn, as we weren’t elevated enough to capture a decent image of  The Matterhorn. As this was the first time I’d used my new Canon 6D, I realised my telephoto lens no longer worked as it was an APS-C lens for my crop sensor which wouldn’t fit the mount on my 6D, so I had to improvise with my 24-70mm. 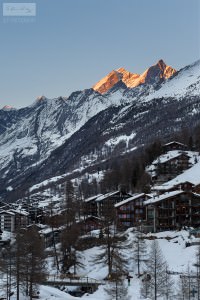 The sun quickly dipped below the horizon so we headed back to the hotel. We hadn’t had much chance to fully research what we had set out to originally do during our stay, which was to wild camp at Stellisee or Riffelsee Lake in view of the Matterhorn for sunrise. The following morning we were all packed up with our camping bags, we spoke to the owner as we were leaving and he advised us that it was very unlikely that we’d be able to access the lakes due to the depth of the snow. Trying so hard not to be disheartened by this news we set off once again to Zermatt to find alternative sports to camp in view of the mountain we were so desperate to shoot at sunrise. We hiked up to a little village called Furri, realising that the snow was far to deep to camp in, we admitted defeat and headed back down. The walk back from Täsch to Randa was a long and cold one, with heavy bags aching our backs and feeling slightly gutted at not being able to camp, we decided to think of other ways to make the most of our trip.

The following day we headed to Zermatt again, with wild camping bags packed in the hope of being able to get to one of the lakes, even if we couldn’t camp there. We arrived at the train station and excitedly asked for two tickets to Rotenboden but unfortunately the response we received was not one we wanted to hear ‘the trails are closed due to too much snow’. Our hearts sank once again, we spent the next 30 minutes in the train station debating what to do. Going up to Gornergrat was an option but at £90 return for the both of us, it was a costly ride, one we hadn’t originally budgeted for. In the end we decided to make the most of our stay and head up to Gornergrat on the train. On the way up, we got great views of the Matterhorn and the other mountains surrounding the area. Second to last stop was Rotenboden, the sign for the station alone was completely buried in the snow and it was fairly evident that all the locals were correct in saying the trail was impassible. We quickly reached the train station at Gornergrat, where we were over 3000m high and despite all the snow, the air was still warm. We set to work shooting the Matterhorn from an elevated level, taking in the amazing views.

After shooting the Matterhorn we decided to head up to the Observatory where 29 peaks of over 4000m can be seen, including the Matterhorn and Monte Rosa range (with Dufourspitze – Switzerland’s highest mountain). It was still quite early on in the day so we sat down and had some lunch. Whilst we were sat waiting for the golden hour to approach, we heard several loud rumbles (similar to one we had heard a day previously, which was an avalanche) after looking around, we couldn’t see any evidence of an avalanche and continued to watch the sun move into it’s prime position. A few more rumbles later, a Swiss local came running up to us announcing that the last train back down was about to leave as there had been several avalanches on the mountain we were on and it had blocked the train tracks. Again our hearts sank, we’d been on so many highs and lows at this point we just didn’t know what to think, all we knew was that our £90 train tickets appeared to be a waste of money. We ran back down to the train where we were told the tracks were completely covered and we had to wait for them to clear the lines! So naturally, we jumped back off the train all giddy/excited and grabbed our cameras quickly to capture any glimpse of the sunset we could before the train was set to leave again. We were greeted by a lovely sunset in which I decided to shoot Monte Rosa with the golden light kissing the surface of the snow. Then the clouds rolled in and lit up beautifully behind the Matterhorn, I grabbed a quick shot hand held, just in time to be called back for the train! We had overheard several things about being helicopter lifted off the mountain etc but were a little confused by this when we all got ushers back onto the train. We got to the next stop and were all escorted back off the train, turned out the track couldn’t be cleared. All of a sudden everyone was being loaded onto a snow plough, except for me and my boyfriend as our rucksacks were too big. We started to get a little worried until a local said to us our ‘taxi’ would be coming soon, we didn’t quite expect a taxi of this kind though… We ended up being taken back down the Mountain on a Skidoo which was immense fun! 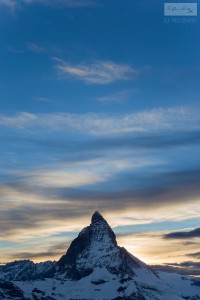 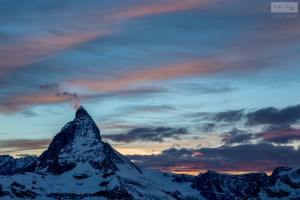 As if our trip up Gornergrat wasn’t enough excitement for one week, the following day it was agreed that as we couldn’t wild camp, we’d go to see the famous Eiger in Grindlewald. Once again see sought advice from the locals on the best route to drive and if all the roads would be open. We were assured that all of the roads would be open and that we’d have no problem in getting to Grindlewald by car. After an hour of driving we reached a mountain pass that was closed! Great! Desperately looking for a way round so we didn’t have to go back on ourselves we searched satnav but our only option was to turn round and go back through Visp, an extra 2 hours added to the journey right there! The next thing we knew satnav had taken us to what appeared to be a rather odd looking tran station, we were a little confused and slightly reluctant to drive onto this random train, but couldn’t work out another option, after all this was the only route we could see to get to Grindelwald. So there we were, sat in my car, on a train designed specifically for cars! It was such a surreal experience and actually quite fun and a relief from having to drive for a short while. After several hours we eventually arrived in Grindelwald and caught sight of The Eiger. At the time we arrived there were still quite a few people around skiing so we headed just outside of the town to a river called Schwarze Lütschine to takes some shots in the early golden hour. 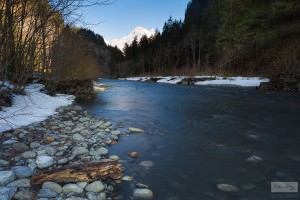 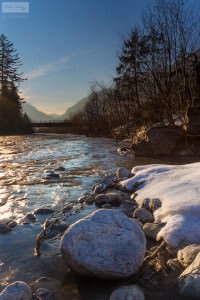 After shooting Schwarze Lütschine we headed back to Grindelwald in the hope of catching some red light on the Eiger and we were not disappointed. Although not ideal, sometimes perfectly clear skies allow the clarity of the light to really shine through. 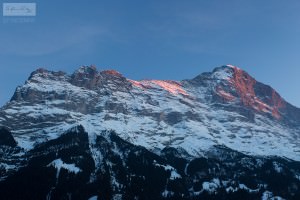 The final Switzerland landscape photography images I wanted to take were startrails. Given the clear skies we’d had all week, it meant perfectly clear skies at night with wonderful stars shining brightly throughout the night. Given the camera has to be set for approximately 2 hours, we decided to shoot them from the balcony at our hotel. After all the view wasn’t a bad one in the slightest. The final image includes nearly 700 shots, taken at 38mm, ISO3200, f/5.6 at 13 seconds exposure. 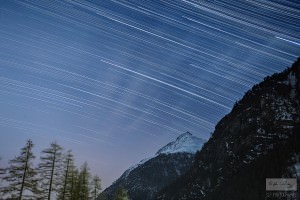 Then that was it, the week was over and we faced another long drive back to the UK. We set off giving ourselves an hour to spare at the ferry, but due to traffic building up as we entered France, it soon became apparent that our spare hour was soon diminishing. We decided not to stop for breaks to save on time and as the journey progressed we also realised that we had approximately 10 miles more in the tank than the remainder of the journey to Calais. We finally reached Calais with almost zero miles in the tank and 15 minutes to spare before the ferry left. However, due to several cars in front of us holding customs up, we ended up missing our ferry and watched it leave the port! We were then informed the next ferry to leave was 3 hours later, which was gutting and meant we wouldn’t get back home until the early hours of the morning!

Overall the trip was amazing, there were many ups and downs, but all endured with a smile upon our faces. Certainly an adventure I won’t be forgetting in a hurry!

All of my Switzerland landscape photography images are available to purchase as prints, to view or purchase please click here.